Patti Page, 64, Professional Baker and Owner of Baked Ideas
The first few months, I texted Lorraine in distress when I received any negative comments from friends or, even worse, no comments. “OK. So let’s dye it back,” Lorraine would say, trying to use reverse psychology on me. Of course, it worked. I didn’t want to hit the reset button and find myself back in the coloring cycle and then have to go through this grow-out again.

My hair color has always been my identity. I was constantly referred to as the “petite redhead.” So I was afraid to stop coloring it, although I’d thought about it for years.
When I’d leave the salon after having my hair colored, I could never relax, because I knew that every minute my hair was going from good to bad: i.e., my roots were coming in.
I hated that! I’d also think, OK, I have four weeks until I’ll need to color again, but I have a wedding in three weeks. What am I going to do? When I was considering going silver,
I was concerned because I’m pale with light eyes.

Would I look really washed-out? Almost all of my friends cautioned against going silver. But after talking to Lorraine (for months!), I was finally ready to give it a try.
For the first few months of growing my color out, I was tortured about it. I couldn’t get my hair to look good. The silver roots at the crown against the red made it looked like I had a bald spot, something really noticeable because I’m short and most people are looking down on me.

Another worry was that I feared people thought I was a lazy person who didn’t color her hair. During that time, I had a wedding and a holiday party, so I used a root cover-up spray. They’re not hard to apply and they wash out easily, too.
But after about four months, when more silver had come in, I actually started to like it.

Really like it! My shade of silver was nice and actually looked good with the red, which had faded to more of a brown. Now I’m totally into it and realize I don’t care what other people think. And I love not having to make time to have my hair dyed, something that didn’t feel natural but that I’d done for almost twenty years.
Now when I look at “before” pictures of myself, the red looks so fake, and I see that the natural silver better suits my style and personality. It’s more for me.

When Patti commented on my graybré and I told her I was growing out my hair color, I proposed the idea of her doing the same. Clearly, Patti was really ready to stop coloring, but was just looking for the opportunity. I’m not saying it was easy for her.

For Patti—and most women—this early stage of growing out a cold turkey is the hardest. Between her three-month and six-month photo shoots and the next,
Patti texted me saying she was “kinda freaking out! I look a little crazy.” But she stuck with it. 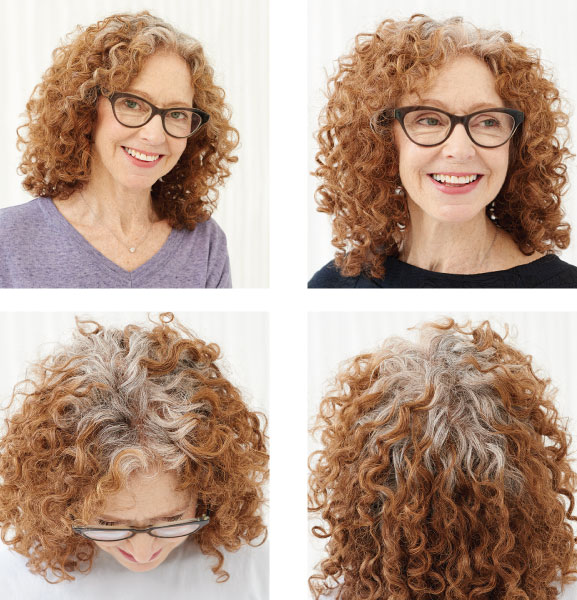 Patti is what I call a “quicksilver,” meaning that within weeks of starting her grow out, her hair was noticeably silver. The benefit of being quicksilver is that you can quickly see how you’ll look with your natural hair color. At this point, Patti had enough silver to start to accept it, and she began to like how it looked.

For this photoshoot, I gave her a trim to remove some of the colored hair so her natural red hue would stand out more.

I think she looks better with shorter hair, too. When it’s longer, it looks like her hair is wearing her.
Then colorist Kristy Wilson formulated a toner that matched her natural silver and used it on the dyed red ends. This broke up the band of color, softened it, and helped it better blend with her natural hue. Romantic haircut for refined natures: the Carre on a leg “What kind of Bob would you recommend for a woman 50+?” a reader asked. 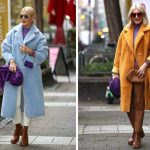 Style is no match for comfort: 10 winter looks for every day women of elegant age What to do with the hair of women of elegant age 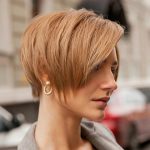